skip to main | skip to sidebar

Thanks are due to  Derek, for uploading the map. Good to know that a word document cannot be uploaded to this blog: it has to be converted to a jpg file.

The map shows Derbyshire [no sightings yet], Nottinghamshire [not many habitats yet, but spread across the whole county], and Leicestershire [a number of sightings, most concentrated within the National Forest area in the north-west of the county.

Posted by dennis at 7:59 AM No comments:

Since moving to Sheffield from Buckinghamshire, I have become increasingly interested in the appearance of HIM in all areas to the north of Rockingham Forest [Fermyn Woods]. I am grateful to my new friends from the East Midlands branch who have generously supplied me with data, in particular, Richard Jeffery, Ken Orpe, Suzanne Halfacre, and Jane Broomhead. Ken Orpe kindly generated this distribution map.

Leicestershire has been particularly fruitful; in particular, the National Forest region has been very good for recorders with several new habitats having been registered. Nottinghamshire less so, but it is particularly exciting to announce  sightings, one adult and four larvae [two close together on one bush Matthew!], in Sherwood Forest. Matthew notes in his book that it was last recorded there in 1939.  Congratulations to Samantha and Nicholas Brownley, who made these observations, with supporting photos. With Chambers Farm Wood in Lincs, this is the most northerly known habitat. Of course, we cannot rule out releases being responsible for these sightings.

Nothing in Derbyshire yet, but they are getting ever closer to the border. Ken Orpe will open a bottle of champagne when it happens!

I have not included Lincolnshire. HIM is well established in several woods south of Grantham, and in Chambers farm wood in the north of the county. 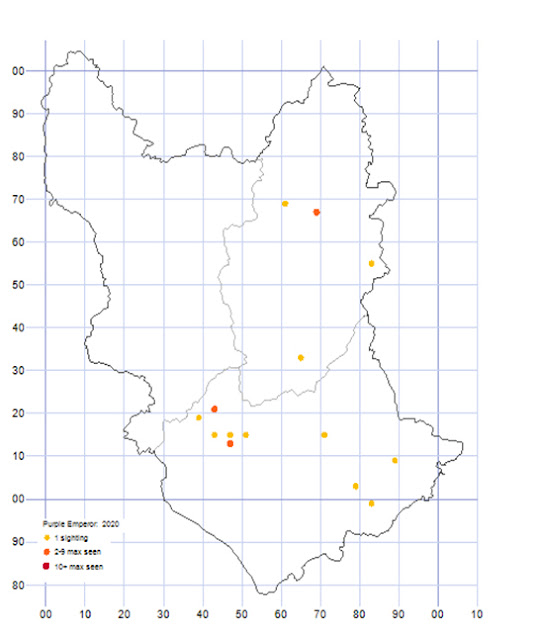 Posted by dennis at 5:59 AM No comments:

Well it has certainly been a while since I have posted anything here. Irrespective of this, much Apatura science has continued in the background and after 6 years of quite intensive science and investigation, I think we are finally ready to go live with Apatura attraction field trails next summer. I have now analysed Limburger and Pálpusztai cheeses, as well as Belachan and Shito pastes. I have also re-analysed Matthew and Niel’s Pantainorasingh plus Monika tiny shrimp mixture all by Solid Phase Micro-Extraction (SPME) Gas-Chromatography/Mass Spectrometry (GC-MS). The volatile analysis has identified one compound that is consistently present in all of these samples. The relative peaks relevant to this compound have been high-lighted with an anterisk (*). In addition to being found in these samples, the compound in question has also been confirmed to be present in all other known Apatura attractants inclusive of Dung (predominantly carnivore), Carcasses, Human skin volatiles, Cigarette smoke and Petrol fumes. The appropriate compound can also easily be explained in relation to the attraction of Apatura specimens which have been photographed clustered around the remains of a dead Rana frog. As predicted, the compound in question is a degradation product of a Branched Chain Amino Acid (BCAA), which have been confirmed to be readily incorporated into the male specific centrally methylated pheromone compound. As such, the males are being directly attracted to the site(s) of what they specifically need in order to produce their male specific pheromone. All I need to do now however is to wait until next summer in order to perform the field trials. It is going to be a long winter. 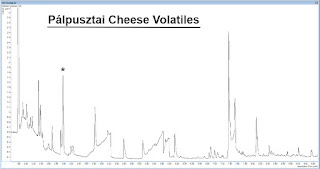 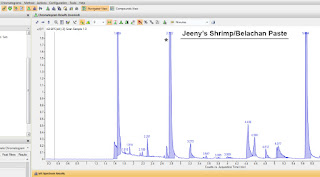 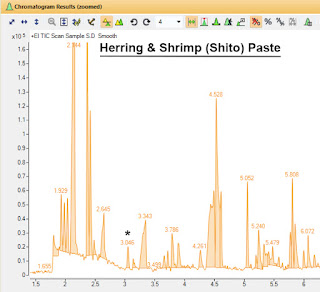 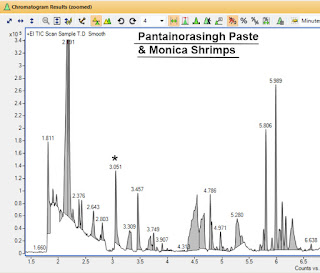 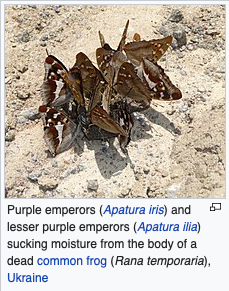 Posted by irisscientist at 11:55 AM 7 comments:

For the last twelve years I've monitored the Emperor's performance in Savernake Forest, Wiltshire, by standardised searches for larvae during the late summer / early autumn period, from the ground. The data are shown in a table on Page 236 of His Imperial Majesty, a natural history....

This is what I look for - 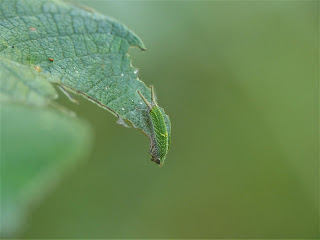 This meagre total is entirely due to a very poor egg lay, as the adults got blasted away by gales in late June and early July - before they'd laid many eggs.

The quality and quantity of the sallow resource in Savernake is actually quite high at present (though sallows close to Grand Avenue remain largely unsuitable as in dry weather their foliage gets covered in dust generated by speeding vehicles - Range Rovers and SUVs mainly; see Book, pages 236-237). There haven't been any problems with sallows droughting off in Savernake (though there have been in Sussex).

Ben Greenaway is finding a similar paucity of larvae in Southwater Woods in West Sussex, though he hasn't finished searching yet.

This means that the prospects for the 2021 Purple Emperor season are, at this stage, distinctly poor. But much depends on the winter, when larval losses can be high. The last thing we need is another mild wet winter (when mortality is very high).

Larvae are so scarce this autumn that I've had to abandon plans to search for Purple Emperor larvae in places where the insect hasn't been recorded for ages if at all, like the Forest of Dean, some woods in Herefordshire and into Monmouthshire, and Devon. I'm only prepared to launch a major autumn larval survey campaign in terra nova after a decent egg lay.

Ben and I hope to have large enough samples of hibernating larvae to monitor winter survival rates, so we can compare survival / mortality rates between Savernake and Sussex.

I'll end with an image of hope. I found two larvae on the same spray on an isolated tree in Savernake which has revealed larvae in eight of the last 12 years. It is very rare to find two close by.

These guys deeply resent each other's presence: one will periodically invade the other's seat leaf, where they will lock horns and try to wrestle each other off. Ridiculous, but that's Emperors all over. 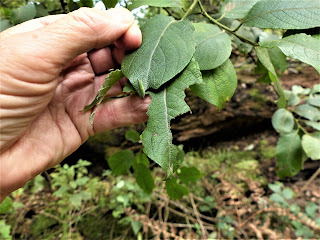 Posted by Matthew Oates at 4:19 AM No comments:

We were expecting His Gloriousness to emerge in fantastic numbers, as post-hibernation larvae had enjoyed fantastic feeding-up weather, from late March through to early June. But therein lies the problem, there weren't that many larvae.

Each winter I follow a number of wild larvae through, in order to measure winter survival / predation rate. However, this winter I didn't manage to get a measurement - the Forestry Commission inadvertently trashed my breeding area (I can't be critical: they left most of the sallows, it's just unfortunate that those bearing my monitored larvae got felled...). The winter was mild and horribly wet, and such winters are fairly disastrous for hibernating larvae, with predation rates as high as 85%.

Ben Greenaway, who was following a large sample of wild larvae in West Sussex, recorded a predation rate of about 80%. Had I known that (we thought the rate was more like 40-50%) I would not have predicted an annus mirabilis.

In early June, the Emperor then got stuck in the departure lounge, as the weather deteriorated as the bulk of the brood was pupating. That may have done some minor damage.

The first Knepp Emperors were seen on June 13th. My first sighting was a rubbish sighting, which was deeply ominous as great Emperor years kick off in spectacular fashion. Numbers failed to build well.

We had a short heatwave around Midsummer Day, wherein the Emperor flourished modestly. Then the wheelnuts came off, followed by the wheels.

His Gloriousity is vain enough to roost in treetop sprays, and ignores the weather forecast. If He was to roost on the sheltered side of trunks and branches He would have survived the late June and early July gales quite well. As it was, He got shredded, and the equally dim-witted females. A number of crippled Emperors were found on the ground.  This one at Knepp - 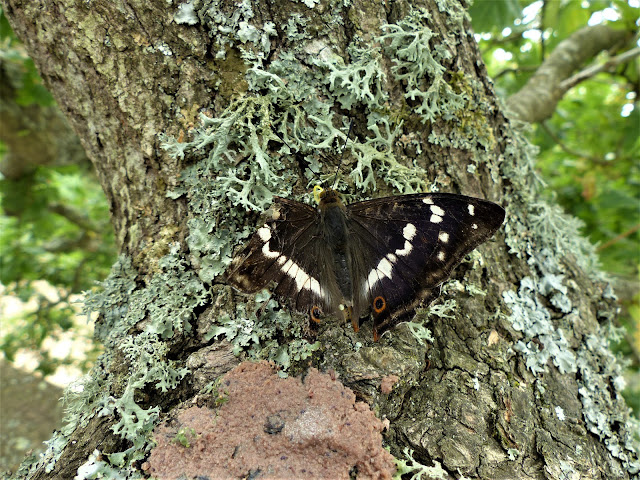 This one in Sherwood Forest, Notts (which has recently re-declared itself Purple), on July 5th - 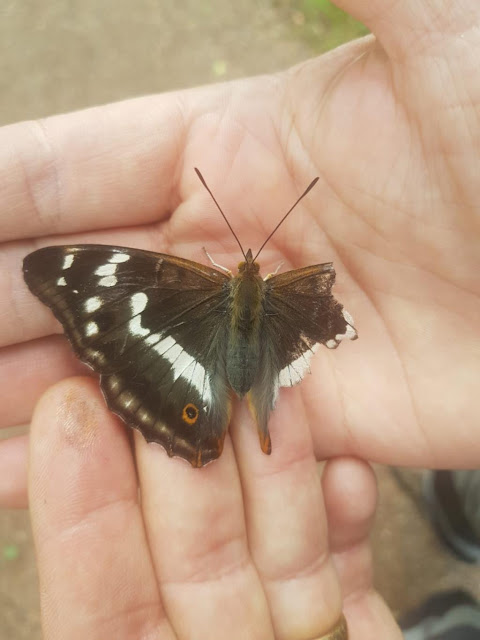 That in itself is not the end of the world, for low levels of larvae tend to lead to low winter predation rates - the tits don't find the hibernating larvae, and the insect recovers.

But Knepp got hit by a double-whammy: the poor egg lay was followed by a horrific drought, during the early August heatwave. The bulk of Knepp's sallows are on former arable fields, they're growing densely together on damaged soils - not on the woodland soils they're designed for. They are drought prone. They wilted badly in 2018, when no rain fell between May 31st and the end of July. But that was after a massive egg lay, so we got away with it.

This year's Knepp sallow drought is an order of magnitude more severe than that of 2018, and occurred after a rotten egg lay.

No way is the Emperor going to abound at Knepp in 2021. 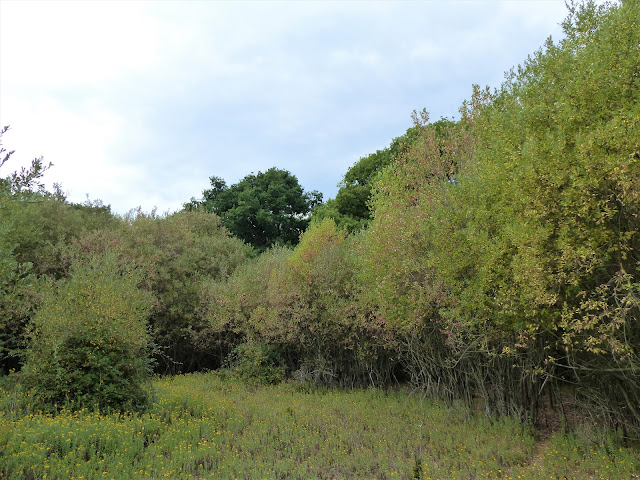 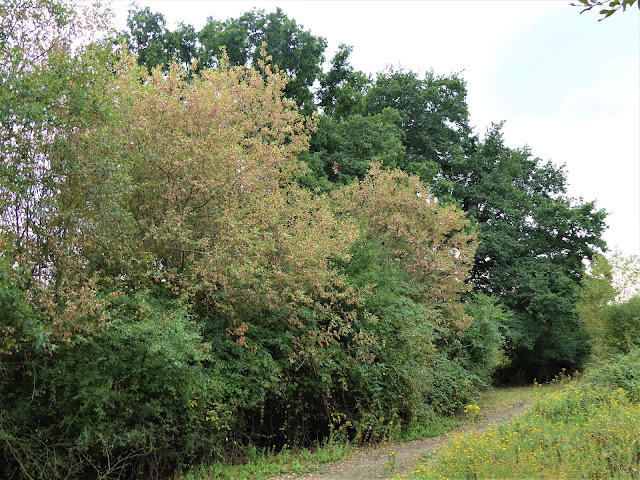 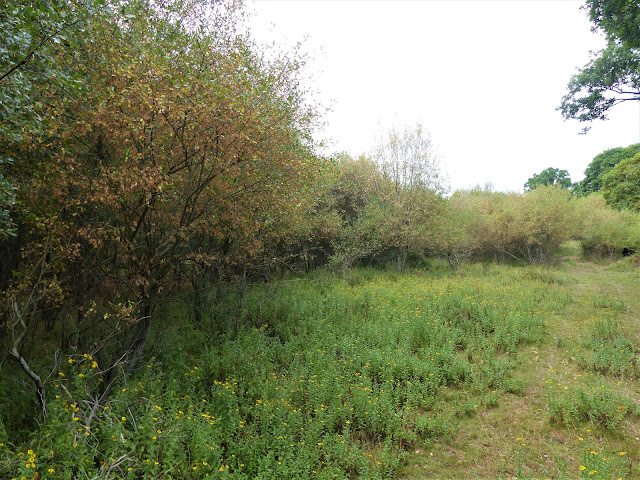 The rains then arrived too late. Oddly, sallows in the woods a mile to the north were not badly affected, but there may be other sites in the Low Weald that were similarly affected.

In all, I think this was the worst Purple Emperor year since 1990, when a mild, wet and stormy winter gave way to a magnificent early spring and May, only for the weather to collapse in early June - probably as the first adults were emerging - Only, in 1990 heatwave conditions returned in mid-July, too late for the adults, and persisted.

Pray very hard...  We need a wet autumn, a bitterly cold and frosty December to de-tit the woods, a cold winter, a steady non-early spring, a fine May, and a decent June and July.

The last of the 2020 Knepp Purple Emperors was seen on July 23rd. Elsewhere, sporadic sightings were made into early August, mainly in the north of the Empire, with the final sighting coming from near East Midlands Airport in newly-Purpled Leicestershire on Aug 18th (a female).

The butterfly seems to have done appalling badly at all sites, with the notable exception of Abbots Wood Inclosure in Alice Holt Forest (I'm not sure why, it may be due to an upsurge in recording). In one top grade site, a privately owned wood known as 'Bucks Best Wood', only a single sighting was made.

From Francis Farrow in Norfolk

In 2017 I spotted my first PE at Beeston Common, Norfolk. Since then we have had sightings of one or two in 2018 and 2019. Last Monday (July 20) I spotted a PE soaring at tree-top height from one group of oaks to another about 20m away and then back again. As it was overhead I could not determine whether it was male or female.

This afternoon I saw a PE leaving a sallow and fly up into the canopy of an oak next to it. I did see the upper side this time but only as a dark colour so still not sure whether it is male or female. As this is the fourth year of PEs at this location I think they must be breeding in the vicinity, especially as it is the same oak/sallow they are mostly seen in, although we never see them until the final two weeks of July, which seems later than other places.