skip to main | skip to sidebar

This is indeed turning into an extremely good Purple Emperor season, almost certainly the best since 2018 - if the weather holds.

At Knepp today, we had 16 down to baits along the hard tracks and some impressive showings up in the oak canopy - strings of 3s and 4s, and there's a lot more to emerge. I wasn't able to do any counts as I was showing groups around, but was seriously wowed by what I saw.

Here's a male pausing after cleaning his tongue on bramble, after a feed - 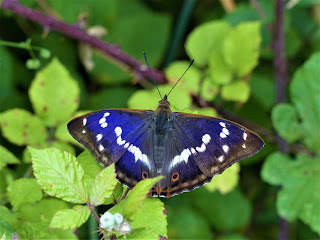 And here's another feeding - 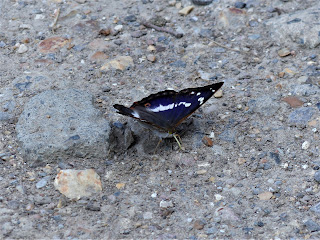 Elsewhere, Purple Emperors have been seen in low numbers in several counties, including Kent, Essex, Herts, Middx, Suffolk, Norfolk, Northants, Surrey, Hants and Oxon. Some counties don't seem to have kicked off yet, notably Warwicks, Wilts and the two northern outposts, Leics and Notts - but I may not have heard.

To the woods, the lot of you, this weekend - and don't come back till you've seen HIM...

Posted by Matthew Oates at 12:24 PM No comments:

As I've long suspected, this looks like a very good Purple Emperor season. Today, I counted 15 on the Knepp PE transect, which is excellent for Week 1. Perhaps this year may even rival the annus mirabilis of 2018...

Better still, males are coming down to feed on the hard tracks: 7 yesterday, 6 today including two together - here's Neil getting at them (a special moment for the ladies, he hopes...) 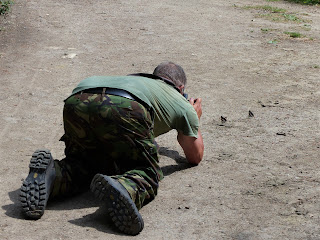 and here's my best effort from another grounded male, today - 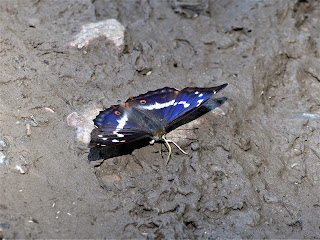 We've baited the hard tracks specially for you... They stink. The cows have added their bit too...

If you're visiting - and this weekend looks great - please park in the main Walkers Carpark at Dialpost and walk on down. It's a hike. Bring food and drink.

Pick up the Purple Emperor Walk guide from the Go Down / shop and follow its map route, which is also marked out on the ground by purple ribbons, with purple bunting marking where to stand to view the best male territories. Do read the blurb, it tells you where and how to look. Here's some bunting - 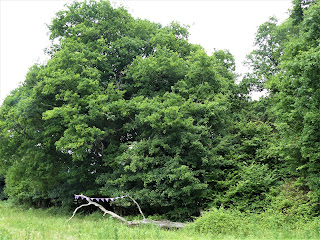 PS  FERMYN WOODS KICKED OFF TODAY, and Norfolk. It's all happening. Don't miss out on the 2022 Purple Emperors...

Posted by Matthew Oates at 12:01 PM No comments:

Took a trip over to Foxley Wood today (23rd) more in hope than expectation. Nice to see my first White Admirals of the year and when a stubborn bank of cloud moved off the first Silver-washed Frits appeared. Sitting on a shady bench watching the Ringlets jinking about and Emperors of the ode variety patrolling the ride mid morning this fellow popped down right in front of me to say hi! If you are planning a trip the car park gate was locked for some reason today so you may have to park elsewhere or do as I did and go through the exit! 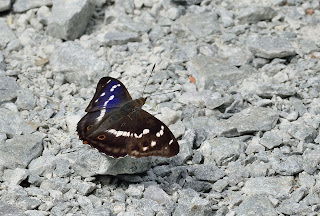 Posted by Brian Hicks at 5:43 AM No comments:

Flourescing Pupae and Back to Knepp

Last night, Mrs O and I found three Purple Emperor pupae in an hour, by searching with The Beast, a powerful UV torch you have to get from Amazon USA. That seems to be about par for a good Emperor site, and is about as many I'd expect to find of the more numerous eggs in an hour at a good site in July.

So far this year, Emperor pupae have been found by UV torch in six counties, including Leics and Notts at the northern edge of the known range. This is a Major Breakthrough... I'll have to rewrite the book...  Here's one from last night, you can spot them from 15-20m - 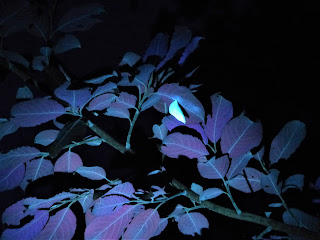 At Knepp, Emperors continue to come out steadily. We saw the first Empress of the year here today, but it is still very early days indeed. Big Bang (mass emergence) should be fairly imminent, perhaps starting on Friday. Purple Hairstreak is only just starting to get going.

Here's Neil, my partner in crime, picking up an Emperor and putting it on his nose. Don't ask why - 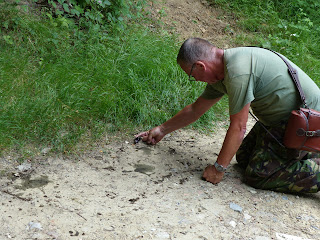 PS  First sighting in Northants today. Not Fermyn, but down near Silverstone. Fermyn should kick off soon.

Posted by Matthew Oates at 1:32 PM No comments:

And the sun shone unblemished throughout...

I didn't go out today (but am going out this evening with the UV torch versus flourescing pupae), but it looks as though today saw the first decent emergence of the year at Knepp - it's still very early days there, with Purple Hairstreak Silver-washed Fritillary and White Admiral only just starting there, and Marbled White and Ringlet only just getting going.

A promising number of sightings from the north London (Herts & Middx) area today, but a lot of sites / counties still haven't started.

Another wave of immigrant Painted Ladies and Red Ads.

I'm heading back to Knepp tomorrow...

Posted by Matthew Oates at 11:54 AM No comments:

Briefly, because I'm knackered, a promising show of males at Knepp today, with at least six feeding down on the tracks (which Neil has baited with shrimp paste solution), and a trio behaving appallingly in one of the favoured territories down Green Lane.

The Knepp Purple Emperor Trail is officially up and running. Pick up the annotated map from the Go Down and follow the purple ribbon - viewpoints for major territories are highlighted by bunting (it's not all up yet). Here's me putting the stuff up - 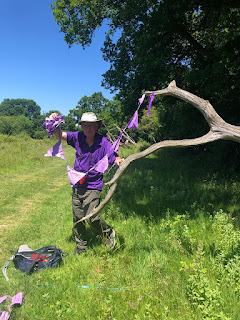 Elsewhere in the Empire, first sightings in Hatfield Forest and Havering Country Park, E London.
Another nice influx of Painted Ladies, Red Ads and Hummingbirds today. This summer is kicking off...

Posted by Matthew Oates at 2:04 PM No comments:

They got the weather forecast wrong today... It seems that most places in The Empire had a very cloudy day, with perhaps an hour or two of brightness around lunchtime, followed by bad light stopped play...

Crucially, I haven't seen a definite Purple Hairstreak here yet, and only saw the first Knepp Ringlet today. This indicates that it is still very early in the Purple Emperor season. I think that what we are seeing is a few early males who developed as larvae on early-leafing sallows and were able to pupate before the weather deteriorated for the Jubilee. But it may be that tomorrow will see the first decent emergence of the year. We will see...

I've got to go home tomorrow evening so may not have time to post anything then...

Other news from today: the first Emperors were seen in Epping Forest, another 'early' site.

Posted by Matthew Oates at 10:27 AM No comments: